Encountering an aggressive driver can be a frightening experience because the unpredictable behavior puts everyone on the road at risk. If you’ve been injured in an accident caused by an aggressive driver, you should consult an attorney as soon as possible to protect your right to compensation for the harm you’ve suffered. 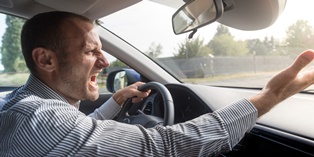 Aggressive driving is defined as committing multiple traffic offenses in a way that endangers people or property. This includes:

Aggressive driving has a number of causes. Drivers with poor impulse control and/or anger management issues are most likely to engage in aggressive driving, but running late or being upset about an unrelated matter can also cause someone to drive more aggressively. Crowded traffic conditions may further increase the risk since they increase the frustration and anxiety of all motorists.

There is some evidence to suggest that people are more likely to drive aggressively when they believe their identity is concealed—such as if they are driving at night or driving a vehicle with tinted windows. However, it is unwise to make assumptions about another driver’s intentions.

The most severe form of aggressive driving is referred to as road rage. This term characterizes behavior that involves using one’s vehicle as a weapon with the intent to harm other people or their property. While aggressive driving doesn’t always involve someone who is angry, road rage occurs when a driver is deliberately putting others in danger due to their anger.

When you’ve been injured in an accident caused by an aggressive driver, you have one year from the date of the incident to seek compensation via a personal injury claim. Medical bills, lost wages, pain and suffering, and any associated property damage should be included in your settlement.

Attorney representation helps maximize your compensation by documenting your damages, proving liability, and anticipating tactics that may be used by unethical insurance companies to deny or minimize your claim.