Encountering an aggressive, angry driver can be a terrifying experience. It's often difficult to predict how this type of driver will react and if his actions might lead to an accident causing severe injuries. If you've been involved in an accident with an aggressive driver, Louisiana law allows you to seek compensation by filing a personal injury claim. 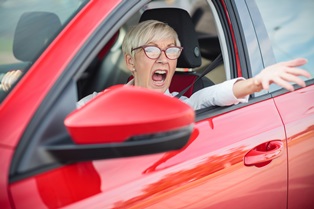 The Difference Between Road Rage and Aggressive Driving

The terms road rage and aggressive driving are sometimes used interchangeably, but they refer to two different types of behaviors.

Aggressive driving means that someone is committing a combination of traffic offenses that endanger people or property. Depending on the circumstances, this can include tailgating, speeding, lane blocking, sudden or frequent lane changing, and failing to yield the right of way.

Road rage refers to more serious types of misconduct. It can involve using your car as a weapon, engaging in a reckless chase, nudging the bumper of a car that tried to cut you off, attempting to run a driver off the road, or forcing a driver to pull over and showing a gun or other weapon. Although Louisiana doesn't have any specific laws addressing road rage, drivers can be criminally prosecuted under laws for aggravated assault.

Aggressive driving is often caused by crowded road conditions and driver impatience. Road rage is typically the "last straw" following incidents of aggressive driving or an attempt to retaliate against the perceived misconduct of another driver. It may also be triggered by stressful situations, such as an argument with a spouse or co-worker, that occurred before the driver got behind the wheel.

A report by the National Highway Traffic Safety Administration found that risk factors for both aggressive driving and road rage include running late due to traffic delays or poor time management, feeling anonymous on a crowded roadway, disregard for the safety of others, and a belief that one is somehow above the law. However, the report took issue with assertions that road rage incidents are increasing with each passing year by arguing greater media attention has only served to spotlight existing problems.

Dealing with Angry and Aggressive Drivers

To reduce the risk of accidents caused by aggressive driving or road rage, drivers are encouraged to allow plenty of time to get to their destination and to make an effort to be courteous to others. When sharing the road with an angry driver, it's recommended that you avoid eye contact and allow the other driver to pass you, if possible. If you feel there is an immediate threat of harm, the safest course of action is to find a place to pull over, lock your doors, and call 911.

Of course, drivers are only responsible for their own conduct while traveling to their destinations. Angry and aggressive individuals who cause accidents are legally liable for the resulting damages. If you've been injured in an accident involving road rage or aggressive driving, Louisiana law allows you to file a personal injury claim seeking compensation for:

Establishing liability for a road rage accident may involve witness testimony, surveillance video, law enforcement reports, or accident reconstruction. Your personal injury claim is a separate legal action from any criminal charges related to the incident, but criminal charges can be used to support your claim of negligence.