you help yourself when you help others 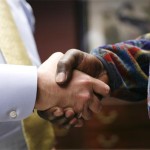 Last weekend I had a chance to attend the Weekend Of the Cross in Ruston, Louisiana with my 14 year-old son and his youth group from our church. We left Thursday evening for Ruston and we returned to Alexandria Sunday afternoon. When I was initially asked to go, I was somewhat hesitant in that I would have to give up a comfortable weekend with television, newspapers, and my nice comfortable bed to stay in a college dorm room and do two full days of physical work in the outdoor heat for people I did not know in the Ruston area. Little did I know that it would be one of the most enjoyable weekends I have had in a long, long time.

It was definitely a work weekend, and it was a weekend of being a servant for the Lord. By the time we arrived in Ruston on Thursday night, it was time to hit our bed which was located in one of the oldest dorms at Louisiana Tech. The air conditioning was not working properly and about 100 kids shared the restrooms and a common shower. We were awakened early Friday morning to start our busy day. I met the group I would be working with which consisted of five bright boys and girls ranging from grades 9 through 11. Our group also contained a youth minister and a handy-man from Trinity Methodist Church in Ruston. After an early breakfast at the church, we loaded ourselves and the supplies needed to rebuild a porch for an elderly woman who lived outside of Chaudrant, Louisiana. We took three vehicles, drove for approximately 30 minutes, and arrived at our destination where we met with the home owner’s daughter and son and various grandchildren, nephews, nieces, and cousins who were roaming the area.

The porch was in deplorable condition and we immediately set to work. We removed everything from the surface of the porch, took up the carpet and plywood, and then removed the old flooring itself. It was at this time that it became readily apparent that God has given all of us special talents and gifts that are different for each one of us. I didn’t have a clue as to how to start rebuilding this porch, but Mr. John Sutton, the handy man, stepped forward and took charge as it was apparent he had done this before. With his direction and expertise, we all were assigned different tasks that we worked on. By the end of the first day, we had visited with all the family members and broke bread with them, sharing our lunch and drinks. We laughed and we smiled and by quitting time, the dismantled rotten porch had a sturdy, level frame to start laying new, solid planks for a firm foundation. We said our goodbyes and returned to the dorm for a well-earned rest. We subsequently had supper and headed to Trinity Church where we heard a band and a sermon about the different gifts God has given us. We were reminded of how the body consists of multiple parts and it takes all the parts in unison to make the body work. After looking back on our day’s work, it was obvious what Jesus was talking about when he said that.

The following morning, we woke bright and early, breakfasted, and returned to our work site to meet with our new friends and to complete the porch. We continued to sweat with everyone participating in different ways. Some people visited with homeowners while others fetched and carried lumber and tools to and from the work site. Some measured boards, others cut with a skill saw. Levelers were employed and everyone hammered and screwed boards into place. It was a true team effort. Rain threatened us the entire weekend, but it turned out to be just a threat.

At the completion of our project, the homeowner came out onto the porch and expressed her thankfulness for her rebuilt porch that was now safe and sturdy for her and her family to walk and sit on and from which she could enjoy the view of her neighborhood. At that time, we all joined hands, both young and old, white and black, male and female, and we praised the Lord for placing us at this home, for letting us meet and make new friends, and for allowing us to be able to help those who needed a little help.

It was an awe-inspiring weekend to see our youth and even parents (such as myself) serving the Lord by stepping outside our regular boundaries and seeing how we help ourselves when we help others.