Drivers with a commercial driver’s license (CDL) are in high demand, thanks to the growing reliance on online shopping and the globalized nature of our economy. Companies are going to great lengths to recruit new workers. However, this means that accidents involving inexperienced truck drivers are becoming increasingly common. 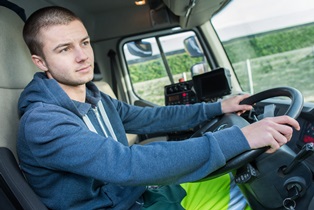 Every industry struggles with employee turnover, but the trucking industry is known for struggling to keep qualified drivers. Turnover varies according to carrier, but it’s not uncommon for companies to have yearly turnover rates of 90-100%. This means that the overwhelming majority of their drivers have been with the company for less than one year.

While some turnover is the natural result of experienced drivers seeking better wages, improved benefits, or more desirable hours, much of this turnover is related to people who leave the industry and are replaced by new drivers.

Commercial drivers often work long hours, spend weeks away from family and friends, and are socially isolated when they’re on the road. They’re also dealing with extreme versions of the stressful situations most drivers encounter during a daily commute: heavy traffic, bad weather, and worrying about whether other drivers are going to cause an accident.

New drivers are often attracted to the industry by the promise of hefty sign-on bonuses and the idea of getting paid to travel the country. Often, these new drivers are individuals who have left other careers and are unable to find suitable work in a shaky economy. There is also a growing trend of retirees earning a CDL to generate supplemental income due to insufficient retirement savings.

How Inexperienced Drivers Can Cause an Accident

Some of the ways inexperienced truck drivers can cause an accident include:

You may notice that a lot of these errors are similar to the types of mistakes a newly licensed teen driver might make on the way to school. However, the potential for a disastrous accident is much greater in a commercial vehicle due to the truck’s massive size. Consider the following:

Types of accidents often linked to truck driver inexperience include:

The Impact of Licensing Fraud

When a truck accident is caused by an inexperienced truck driver, it’s important to look at the driver’s history to make sure he is fully qualified to be behind the wheel. Due to the high demand for CDL drivers, several unscrupulous companies have popped up to help workers forge the documents needed to find employment. For example, a 2006 report from the Department of Transportation found 15,000 suspected fraudulent license holders in 27 states. These fraudulent license holders included people with falsified exam results, as well as those who had lost previously valid licenses due to safety violations.

How a Personal Injury Lawyer Can Protect Your Right to Compensation

If you’ve been injured in an accident caused by a commercial driver, you may be entitled to compensation for accident-related damages. This includes:

If you’ve been injured in a truck accident you need to speak with an experienced truck accident attorney as soon as possible. Please contact us online or call our Alexandria office directly at 318.541.8188 to schedule your free consultation.