drowsy driving is similar to driving under the influence

Drowsy Motorists Are as Impaired as Drunk Drivers

Burning the candle at both ends? You might want to think twice—and then get some rest—before sitting behind the wheel. Multiple studies conclude drowsiness to be just as impairing as alcohol, with similar negative effects to drivers’ judgment, reaction times, and concentration, all risks for a potential distracted driving crash. Studies report that 9 people die each day in the United States from distracted driving accidents. 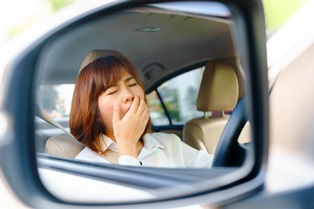 Though most wouldn’t risk the consequences of driving drunk, too many folks drive while tired on a regular basis, endangering themselves and everyone on the road.

Drowsy driving is a grossly underreported safety issue, in part because fatigue is often difficult to detect or prove after a crash. Though federal statistics estimate that drowsiness is a factor in just one to two percent of accidents, a 2018 study from the AAA Foundation for Traffic Safety found the percentage of crashes involving tired drivers to be nearly eight times higher.

In fact, researchers determined that 9.5 percent of all accidents—and 10.8 percent of property damage crashes—involved fatigue!

These accidents have a number of commonalities:

Additionally, commercial drivers, shift workers, people with untreated sleep disorders, motorists who take prescription medication with sedating side effects, and others who don’t get enough sleep appear to be most at risk.

You can help avoid drowsy driving by getting at least seven hours of sleep and avoiding heavy foods or sedating medications before driving. Stop for a coffee and a 20-30 minute catnap if you have trouble keeping your eyes open, start drifting in and out of your lane, or don’t remember the past several miles you’ve driven.