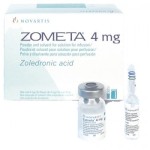 Mega-drug manufacturer Novartis Pharmaceuticals took a $3.2 million hit in its extremely large wallet thanks to a Montana jury who found in favor of a nurse who developed degenerative jaw problems after taking Zometa.

This is the first trial in the country of a claim involving the bone-strengthening drug. Worse news for Novartis is the effect the verdict will likely have on 500 other consolidated Zometa cases currently pending in New Jersey state courts and federal court in Tennessee.

In the Montana case the plaintiff developed serious dental and jaw-related problems after taking Zometa for several years. Her condition is incurable and will result in lifelong disability. Her lawsuit alleged Novartis knew patients taking Zometa were vulnerable to a degenerative jaw disorder called osteonecrosis or bone death, particularly patients who undergo invasive dental procedures such as tooth extraction. She claimed Novartis failed to adequately warn her or her doctors of the risks.

At trial Novartis was accused of playing down the drug’s risks and obscured and delaying the release of information to the public and medical community in order to control the public relations fallout from the disclosure and maximize their marketing of the drug. Internal emails introduced at trial showed Novartis knew of the drug’s risk through its own extensive research communicated by its medical research and marketing departments to company executives who actually tried to suppress the information.

Novartis claimed their warnings were adequate and the risks were included in their labels. According to the plaintiff’s attorney the Zometa label is on a small piece of paper in tiny print that is barely readable and folded 20 times like an accordion. If the label were printed in normal 12 point font it would be 22 pages long.

This is just the latest egregious example of a drug manufacturer putting profit over patient safety. The only way the public has to put a stop to this type of activity is to bring successful products liability cases in court that forces these giant corporations to do the right thing and inform consumers and the doctors prescribing these drugs.