The festival supports the Children’s Advocacy Network, with all proceeds going to help the children of Louisiana who have been victims of child abuse and neglect. Holifest also supports CAN’s program, CASA, or Court Appointed Special Advocate program. CAN trains quality community volunteers to serve as court-appointed special advocates 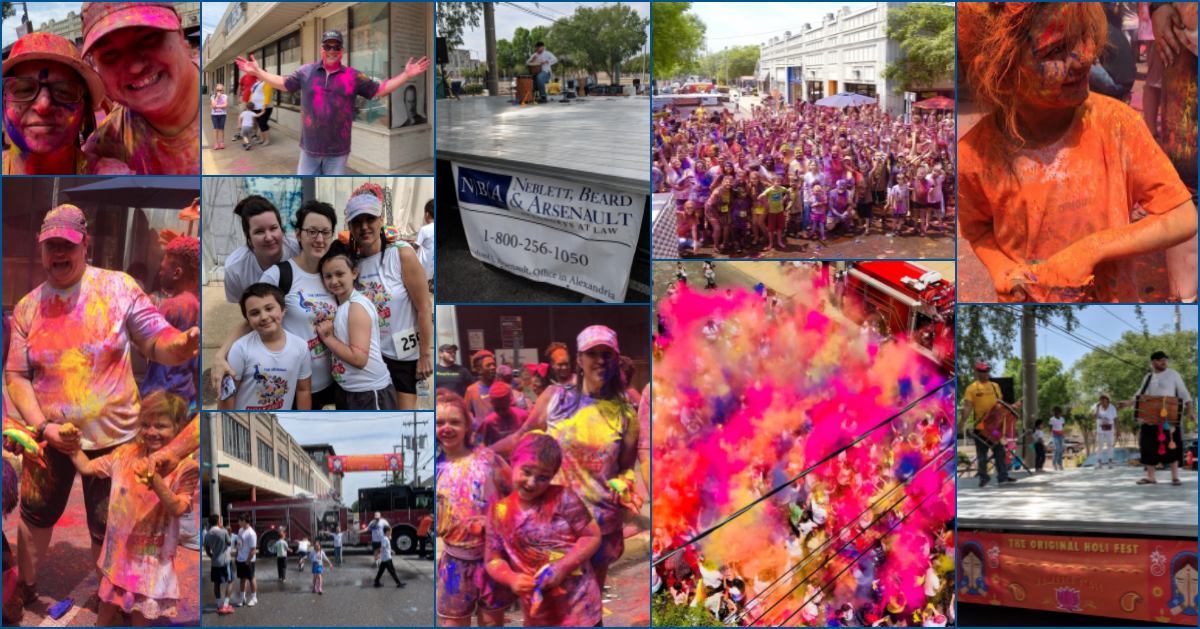 for abused children. Their mission is to ensure every child in need has an advocate to fight for them.

Amy Pillarisetti, Holifest director and president of the Cenla Indian Association, reached out to Neblett, Beard & Arsenault for their support of this year’s festival. The firm was proud to again sponsor a great cause, and several NBA employees and their families signed up for the 4k race to show their support.

The festival was held in front of Tamp & Grind in Downtown Alexandria. The local coffee shop supplied coffee for festival-goers who arrived early, and children covered the blacktop with colorful chalk decorations in front of one of Alexandria Fire Department’s firetrucks. Over one hundred participants lined up in front of the firetruck for the start of the race. At exactly 11AM, the whistle was blown and everyone took off as volunteers sprinkled the racers with colored powder. The 4k route went right through the heart of Downtown and along the scenic Red River path, with more volunteers at stations along the way to dust everyone who passed them in more colors and cool them off with water guns filled with colored water. The Alexandria Police Department guided the way, directing traffic at each intersection and high-fiving runners as they passed. Once everyone made it back to Tamp & Grind, the festival came to life.

Performances from local artists, dance teams, and members of the CENLA Indian Association kicked off at 11:30am. Spectators grabbed a plate of delicious Indian cuisine and headed to the stage to watch the performances. Local vendors lined the streets, some painting pictures of the Holifest scenery, and others selling local goods and produce. After the on-stage performances concluded, it was time for the colors. Everyone grabbed as much powdered color as they could carry, and men, women, and children of all ages stepped into the color zone to paint and sprinkle one another with vibrant shades. The firetruck turned on its sprinkler, and before long, Downtown was a colorful sight to see as everyone was covered in the bright pigmented powder.

The true meaning of Holifest was clear for everyone present – when everyone looks the same, they are all combined for the same purpose, and everyone can come together to celebrate cultural diversity. Neblett, Beard & Arsenault was happy to support Holifest, CAN, and their mission, and we celebrate the festival’s success.

Learn how you can volunteer with CASA.