Post-traumatic stress disorder (PTSD) is a mental health disorder that some people develop after a life-threatening event. It's most commonly associated with military veterans but is often seen in those who've been seriously injured in a car crash. In fact, the National Center for PTSD reports that 9 percent of people involved in motor vehicle accidents will experience some degree of PTSD. 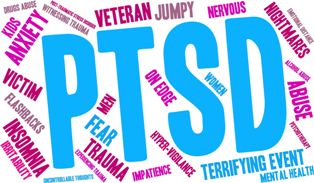 It's perfectly normal to feel upset and anxious after a car accident, but these feelings typically start to fade over time. If an injured person continues to fixate on the trauma to the extent that it interferes with daily activities, PTSD may be to blame.

PTSD is diagnosed with a psychological evaluation that looks for specific mental health difficulties. Symptoms of PTSD include:

Researchers have found that people with other mental health problems, such as a past history of anxiety and depression, are more likely to be diagnosed with PTSD after a car accident. Those who lack a strong support system of friends and family are also at a greater risk.

Can Children Get PTSD?

People of all ages can develop PTSD. In fact, children who've been injured in a serious car accident are especially vulnerable to developing the condition.

A child with PTSD may experience intense separation anxiety when not surrounded by parents or caregivers. He may regress in developmental milestones, such as wetting the bed when he was previously potty-trained. Trouble in school or a reluctance to spend time with friends are also common PTSD symptoms in older children.

How Is PTSD Treated?

The most popular treatment for PTSD is Cognitive Behavioral Therapy (CBT). There are two types of CBT: Cognitive Processing Therapy (CPT) and Prolonged Exposure (PE).

CPT focuses on helping the PTSD sufferer learn skills to understand how the triggering event has affected his thoughts and feelings. For example, someone struggling with PTSD after a car accident might work with a therapist to come up with ways to honor the memory of the friend lost in the accident while letting go of his survivor’s guilt.

PE involves slowly exposing sufferers to triggering situations or events. If a PTSD sufferer is afraid to drive, his treatment might include driving in isolated areas with a therapist and slowly working up to traveling on a busy interstate.

Doctors may also prescribe medications to treat PTSD symptoms. Selective serotonin reuptake inhibitors (SSRIs) and serotonin-norepinephrine reuptake inhibitors (SNRIs) are commonly used to help PTSD sufferers deal with their symptoms, since they address many of the depressive symptoms associated with the disorder. For those who struggle with nightmares, Prazosin may be used as well.

Am I Entitled to Compensation?

Personal injury law covers physical trauma such as broken bones or burns as well as mental health disorders related to the negligence of others. If you've developed PTSD after a car accident, you can seek reimbursement for the cost of your therapy and medication, as well as repayment for lost wages if your PTSD kept you from working.