From 1999-2015, nearly 700 residents of North Carolina died from mesothelioma—an aggressive, rare form of cancer caused by asbestos exposure. The state ranks 12th in the U.S. for mesothelioma and asbestosis deaths.

The Link Between Mesothelioma and Asbestos Exposure

Asbestos is group of six types of naturally-occurring minerals consisting of durable, heat-resistant fibers. Because asbestos has thermal stability and can withstand many chemical breakdowns, it was once considered a “miracle mineral” and used by many industries to manufacture hundreds of common consumer products.

However, in the 1930s, health experts determined that asbestos was highly toxic, and later found that exposure to this substance caused mesothelioma. But individuals who worked mining asbestos or in plants processing it weren’t the only ones at risk for exposure and for developing this rare and aggressive cancer. Asbestos fibers and dust stayed on workers’ coats, clothing, and shoes when they went home. This secondary exposure contaminated family members who inhaled or swallowed the toxic material.

It’s possible when these fibers are ingested, some are trapped in the mucous membranes of the nose and throat and can be removed. But others settle deep in the lungs or the digestive tract and stay there. Over time, the fibers damage the cells in the body and cause serious health problems in later years. 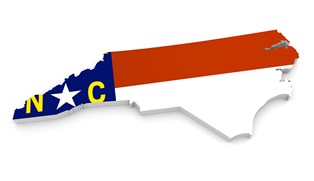 Many industries in North Carolina may have exposed workers to asbestos. The state had three military bases, along with many mines, chemical factories, and power plants.

Additionally, the mines in North Carolina had a major supply of asbestos-contaminated talc—which often occurred together in certain geological formations.

Laws weren’t passed until the 1970s requiring talcum powder and talc products to be asbestos-free. Many talc suppliers operated mines in the state and were sued for exposing the public to asbestos. One California verdict against Whittaker, Clark & Daniels awarded the plaintiff $18 million.

Worksites and Buildings Where Asbestos Exists

There are also many locations, workplaces, and public buildings that potentially exposed North Carolina residents to asbestos, including:

Workers often make mistakes when renovating or demolishing buildings where asbestos is believed to be “safely contained” that put the public at risk for exposure. In the North Carolina Occupational Safety and Health Review Commission offices, for example, workers removed asbestos without the proper safety equipment.

Military Base and Shipyard Exposure

Many industries in North Carolina exposed workers to asbestos, but military employees faced an exceptionally high risk of asbestos hazards. Workers at Fort Bragg, one of the largest military bases in the United States, were in danger of developing mesothelioma. Construction for the base started in 1918, and bases built before the 1970s likely contain asbestos.

The North Carolina Shipbuilding Company was active during World War II. Workers at this shipyard built over 200 ships, including 54 for the U.S. Navy. At one time, the company employed untrained citizens as well as 20,000 professional shipbuilders. Through both World Wars, shipbuilding companies and the military relied on asbestos in Navy ships and other types of marine vessels. This put many employees and thousands of veterans at risk for developing mesothelioma due to a high exposure rate.

If you suspect you have mesothelioma due to asbestos exposure, you need an accurate diagnosis. You also require a proper treatment plan. The following North Carolina mesothelioma cancer centers have resources that may be able to assist you:

If you believe you have mesothelioma caused by asbestos exposure, you may qualify for compensation. However, the statute of limitations in North Carolina allows you only a certain amount of time to file your lawsuit. A personal injury asbestos lawsuit has to be filed within three years from the date of diagnosis. If a loved one died from mesothelioma due to asbestos exposure, you have just two years from the date of death to file. If you don’t meet these deadlines, you waive your right to compensation.

Our experienced mesothelioma attorneys at Neblett, Beard & Arsenault are ready to guide you through the complex legal process and fight for the compensation you deserve. We handle these cases on a contingency fee basis, so you owe no out-of-pocket expenses up front.

To learn more about our experience in these cases and your legal options, contact us online or call our office directly at 318.541.8188 to schedule a free, no-obligation consultation.