Exposure to Asbestos and Your Risk of Mesothelioma in Kentucky

Kentucky may be recognized for its horse racing, bluegrass, and bourbon, but it also has a long history of coal mining. This occupation is naturally dangerous because to extract the coal, workers must be underground and work in unhealthy and often unsafe conditions. Aside from being at risk for explosions and cave-ins, miners were also exposed to asbestos, 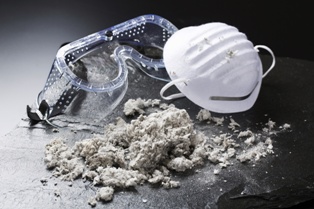 which is the only known cause of the deadly cancer, mesothelioma.

Asbestos, a group of six of naturally occurring minerals popular for its heat-resistant qualities, often exists in the air where coal is mined and extracted. Additionally, asbestos particles and fibers can be embedded into the coal, and the crushing and grinding of the coal when processing it releases those particles into the air and puts miners at risk. Most miners didn’t know of their exposure to asbestos and often brought the fibers home on their clothing, exposing their families to this cancerous mineral, as well. From 1999 – 2015, three have been 490 mesothelioma deaths in Kentucky.

Understanding the Dangers of Asbestos

Asbestos was often referred to as a “magic mineral” because of its heat-resistant qualities. Because it’s strong and durable and can resist many chemical breakdowns, manufacturing companies wanted this mineral for use in their consumer products. Paper, roofing tile, plastic, and insulation are just some of the items that contained asbestos. Because so many goods were made of asbestos, and the tools and equipment used to make them contained asbestos, many occupations and work environments exposed employees to this toxic, deadly material.

Eventually, the connection between asbestos and mesothelioma and other asbestos-related conditions was discovered in the 1960s. Once inside the body, these fibers can lodge themselves in the tissue surrounding body organs—the mesothelium. They can remain there for years and even decades until damage occurs to the cells in the body. In most cases, mesothelioma begins in the lining of the chest called the pleura.

Occupations and Work Environments That Exposed Kentucky Workers to Asbestos

Although Kentucky has no naturally occurring asbestos deposits, there are a variety of Kentucky jobsites and schools that are known to have exposed workers to asbestos, as well as occupations considered high-risk for exposure. These include:

Specifically, Danville, Kentucky has dealt with major asbestos problems in the community. In 2006, the floor tile adhesive in a grocery store scheduled for demolition was found to contain asbestos. Two years later, a survey crew found there was asbestos in the city hall boiler room. The city paid approximately $25,000 to abate both sites and have the asbestos removed.

Additionally, asbestos materials were found in the ceiling of Knight Hall at Georgetown College when a steam pipe began to leak. Although the school arranged for an abatement of the materials, the school never evacuated the hall.

If you believe you were exposed to asbestos and want to talk to a doctor, or you believe you have symptoms of mesothelioma, it’s important to work with healthcare professionals who are skilled in and knowledgeable about this deadly cancer. The following cancer center may be able to help:

It isn’t easy for Kentucky victims to win lawsuits for asbestos exposure. Historically, Kentucky courts have ruled in favor of the manufacturers who used or exposed workers to asbestos; and because Kentucky has a one-year statute of limitations for filing a personal injury lawsuit, instead of two years as in most states, the law seems to favor corporate defendants.

It’s important to note that many Kentucky lawsuits for asbestos exposure are settled out of court, and the limited few that make it to trial usually result in favor of the defendant.

However, those exposed to asbestos in Kentucky may be able to use a legal doctrine known as “removal of jurisdiction” to have their case tried at Kentucky’s federal district court rather than the state court. This move can sometimes be helpful to the plaintiffs.

There have been two notable lawsuits in favor of the plaintiff:

Kentucky residents with mesothelioma face expensive medical treatment and a one-year statute of limitations for filing a lawsuit, so it’s important to contact an experienced mesothelioma lawyer soon after diagnosis. Our attorneys can help get you the compensation you deserve and hold the negligent companies accountable for your asbestos exposure. Don’t miss the filing deadline after learning you have mesothelioma. If you do, you’ll forfeit your right to compensation.

Dealing with a mesothelioma diagnosis isn’t easy for you or your family, but Neblett, Beard & Arsenault can help. We handle asbestos-exposure cases on a contingency fee basis—which means you owe no out-of-pocket expenses and will pay attorney fees only when we settle your claim. To learn more about our experience in these cases and your legal options, contact us online or call our office directly at 318.541.8188 to schedule a free, no-obligation consultation.