Protect Your Rights After a Traffic Circle Accident

After having been extensively used in Europe, traffic circles—also referred to as roundabouts—are now becoming a popular way to control traffic at intersections formally using four-way stops. Although they're typically implemented as a safety measure, roundabouts such as Alexandria's South Traffic Circle can become common traffic accident sites when drivers don't understand how to proceed through the intersection. 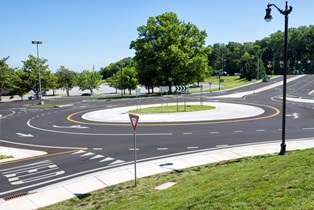 A typical roundabout has a round central island with a roadway circle around it. Traffic travels counterclockwise around the roundabout, and there are no traffic signals or stop signs.

You should slow down when approaching a traffic circle but can proceed without stopping if no other vehicles are present. However, you must yield to any vehicles already present when you enter the roundabout. If another car approaches at the same time, yield to the driver on your left.

In addition to their reported safety advantages, traffic circles are growing in popularity because of their cost efficiency. Without signaling equipment to install or maintain, a roundabout saves roughly $5,000 per year over a four-way stop. Signaling equipment also needs to be replaced every 10 years, while a roundabout has a 25-year service life.

Although roundabouts are statistically a safer way to direct traffic over four-way stops, their safety benefits are only valid when drivers are using them correctly. Dangerous car accidents occur when drivers don't understand how to enter the traffic circle or are traveling at unsafe speeds. Drunk or distracted drivers can also cause collisions.

About 75% of traffic circle accidents involve only property damage. The remaining 25% involve injuries attributed to the following collision types:

Alexandria's South Traffic Circle is one of the most disliked intersections in Louisiana due to confusion over how to proceed through the roundabout. In 2016, the South Traffic Circle was reported to have accident rates at 15 to 30 times the state average. Other local roundabouts, such as the one at England Airpark in Alexandria and the one at the intersection of US Highway 171 and Louisiana Highways 8 and 28 in Leesville, have also been the sites of a significant number of accidents caused by drivers who don't understand how to proceed through the intersection.

Protect Your Rights by Filing a Personal Injury Claim

If you've suffered injuries in a traffic circle accident, you're entitled to compensation for medical expenses, lost wages, and pain and suffering from the at-fault driver or drivers. You can still receive compensation if you're partially at fault for the accident, although your settlement will be reduced by your assigned percentage of fault to reflect your own responsibility for your injuries.

After you've attended to your immediate medical needs, contact an experienced car accident attorney to begin the process of filing a personal injury claim. Your attorney can help assess the worth of your case, document your damages, gather evidence, and negotiate with the insurance company on your behalf. Since personal injury attorneys accept cases on a contingency fee basis, there is no upfront cost for representation.