Information and Support for Connecticut Mesothelioma Sufferers and Their Families

Mesothelioma deaths are on the rise all across the nation. This deadly form of cancer that affects the mesothelium is an important tissue in the body that lines and protects the lungs, heart, and other internal organs. This cancer is often painful, progresses quickly, and is usually fatal to its victims.

The primary cause of mesothelioma has been directly linked to exposure to asbestos fibers, often by inhalation. It can take years or even decades after exposure for mesothelioma to develop, but once it is diagnosed, the average survival time is not long. After the condition is discovered, victims typically face a lifespan of 12 to 21 months.

Asbestos is composed of a mixture of several kinds of silicate minerals found in the earth, and it is mined for its many industrial, commercial, manufacturing, and consumer uses. The thin mineral crystals are valued as an insulator, providing resistance to heat and fire, and it is also an electrical insulator. However, these crystals are fragile and can break into microscopic fragments that are easily disbursed into the air. Once airborne, they can be inhaled and lodge in the body, leading to diseases like asbestosis or mesothelioma.

The useful properties of the mineral were discovered before the health risk was discovered, leading to the use of asbestos in many places where it is now highly regulated or banned outright.

Sources of Exposure to Asbestos in Connecticut

There are many sources of potential exposure to asbestos in Connecticut, both past and present, including the following:

Although there are no active asbestos mines in Connecticut, asbestos is sometimes a byproduct of mining operations. Litchfield County was once home to an asbestos mine, although it is no longer in service. Connecticut does have other rock quarries and active mines for other minerals, which can contain trace amounts of asbestos and, thereby, expose workers as well as nearby residents to particulates in the air and water. 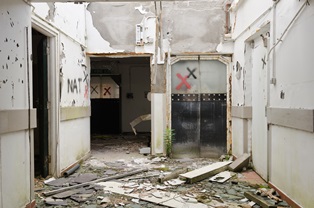 Asbestos was once used routinely as a building material, and it is common in many older buildings throughout the state. Construction workers are at risk for exposure, particularly when engaging in renovation, remodeling, or demolition projects on old buildings. Residents of older homes can be at risk during remodels or repairs, as well. Those who live or work near such jobsites are also at risk, as the fine particles can be released into the surrounding air and carried by wind through open windows or doors.

Shipyards pose a serious risk of asbestos exposure because not only do the older buildings in the yards often contain asbestos, asbestos is an integral part of some shipbuilding processes. Those who work or have worked in shipyards face a greater chance of occupational exposure.

Connecticut is home to several older military installations, many of which were constructed using asbestos or asbestos-bearing products. The Bradley Air National Guard Headquarters in Granby, for example, was discovered to be constructed with asbestos-bearing roofing, floor materials, and caulking, resulting in an asbestos remediation effort of over 7,700 square feet of space in 2009. The Coast Guard in Connecticut is known to have used asbestos extensively in its construction. The New Haven Coast Guard spent nearly $400,000 in 2008 in an asbestos remediation project on its buildings. Additionally in 2011, the Coast Guard Museum had to be closed for asbestos removal, as well. Other Coast Guard facilities may also face similar contamination. The New London Naval Submarine Base in Groton was America’s first submarine base and is now the primary submarine base for the East Coast. This facility has employed thousands of active-duty servicemembers engaged in submarine repair activities, replacing or repairing many submarine parts that may contain asbestos.

Connecticut has a long history with the manufacturing industry, where asbestos has been used heavily in both construction of facilities and in the production of goods. In one notable legal case, the family of a deceased aircraft carrier fireman who worked on pumps built with asbestos-contaminated parts and subsequently passed away from mesothelioma was able to successfully sue the pump manufacturer.

Due to the excellent thermal and electrical insulating properties of asbestos, workers in power plants such as the Millstone Power Plant or the Connecticut Yankee Atomic Power facility may face potential exposure and increased risk of mesothelioma, asbestosis, and related health conditions.

There are many other professions in which a worker could have been or may continue to be exposed to asbestos, including:

The list of companies or locations that have faced or could face asbestos-related lawsuits is also extensive and includes such places as:

Seeking Treatment for Mesothelioma in Connecticut

Connecticut is home to many hospitals and cancer treatment centers that can provide high-quality medical service to mesothelioma sufferers and their families. Although mesothelioma is almost always fatal, seeking treatment can both prolong life and increase quality of life. Some locations to seek treatment or counseling for mesothelioma in Connecticut include:

The statute of limitations to file a mesothelioma lawsuit against a company, employer, facility, or other organization varies from state to state. Once a diagnosis of mesothelioma has been established, sufferers have up to three years from the date of diagnosis to begin a personal injury lawsuit against the responsible party. If family members choose to file a wrongful death lawsuit after their loved one has died, survivors also have a three-year time period, beginning on the date of death.

Connecticut rules are very strict on this time limit, so it’s important that victims and their surviving families take action quickly by contacting an attorney before the statute of limitations expires.

The attorneys at Neblett, Beard & Arsenault are here to help you and your family with your mesothelioma claim today. Our firm works with victims and their families on a contingency basis, which means you don’t pay anything unless a settlement is reached or we win your case in court.

To arrange a free consultation with one of our experienced mesothelioma attorneys, please feel free to contact us online or call us directly at 318.588.6303.