Motorcycle accidents frequently result in very serious injuries, but you are entitled to compensation for the harm you've suffered if another party's negligence contributed to the accident. In Louisiana, victims have one year to file a personal injury or wrongful death claim. 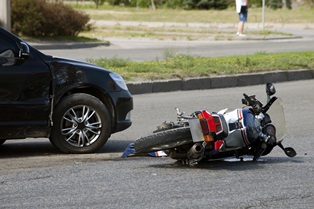 Cars making left-hand turns account for about 42% of motorcycle accidents. The car turning may strike the motorcycle when it's going straight through an intersection, trying to overtake the car, or passing the car.

Even though turning accidents are a common cause of collisions between two vehicles, this type of accident is more common when a motorcycle is involved. This is due to the motorcycle's small size relative to the size of the turning vehicle. The driver of the car may fail to see the motorcyclist and/or judge his speed incorrectly.

A driver who hits a motorcyclist while making a left-hand turn is almost always at fault for the accident. However, the motorcyclist could be partially at fault if he was speeding or in the incorrect lane.

Motorcyclists can be struck from behind when they stop or slow down suddenly to avoid a road hazard. The driver behind them may be distracted or not see what's happening due to poor visibility conditions.

Rear-end accidents are generally the fault of the person who failed to stop in time to avoid a collision. The only noteworthy exception would be if you stopped without a valid reason.

Head-on collisions can be caused by driver fatigue, drug or alcohol use, or distracted driving behaviors. They are most common at night and during poor weather.

Liability for head-on collisions typically rests with the driver who crossed into oncoming traffic.  Possible exceptions might be made for medical emergencies or chain reactions from multi-vehicle accidents.

Lane change accidents occur when a car cuts in front of a motorcyclist who is traveling in heavy traffic. Often, the motorcycle was in the driver's blind spot before the driver switched lanes.

It's recommended that motorcyclists remain vigilant to watch for turn signals, a driver's head moving, or a car wandering within a lane while a driver is checking his mirrors. However, even though being watchful is a smart safety move, a lane change accident is still the fault of the person who changed lanes in an unsafe fashion.

Pot holes, uneven heights between pavement lanes, road debris, or slick road conditions can cause a motorcyclist to lose control. Collisions caused by road hazards usually involve only the motorcyclist or both the motorcyclist and another vehicle.

In this type of accident, the agency responsible for maintaining the road could potentially be liable. There might also be a valid claim against the manufacturer of the motorcycle or the motorcycle mechanic if some sort of defect in the bike or repair work contributed to a loss of control.

When your injuries are caused by another party's negligence, you may receive compensation for the following:

Following a fatal accident, eligible family members can file a wrongful death claim. Damages are similar to what is awarded in a personal injury claim, with the addition of funeral and burial costs.

Have You Been Injured In A Louisiana Motorcycle Accident?

If you or a family member has been injured in a motorcycle accident you need to speak with an experienced motorcycle injury attorney as soon as possible. Please contact us online or call our Alexandria office directly at 318.541.8188 to schedule your free consultation.