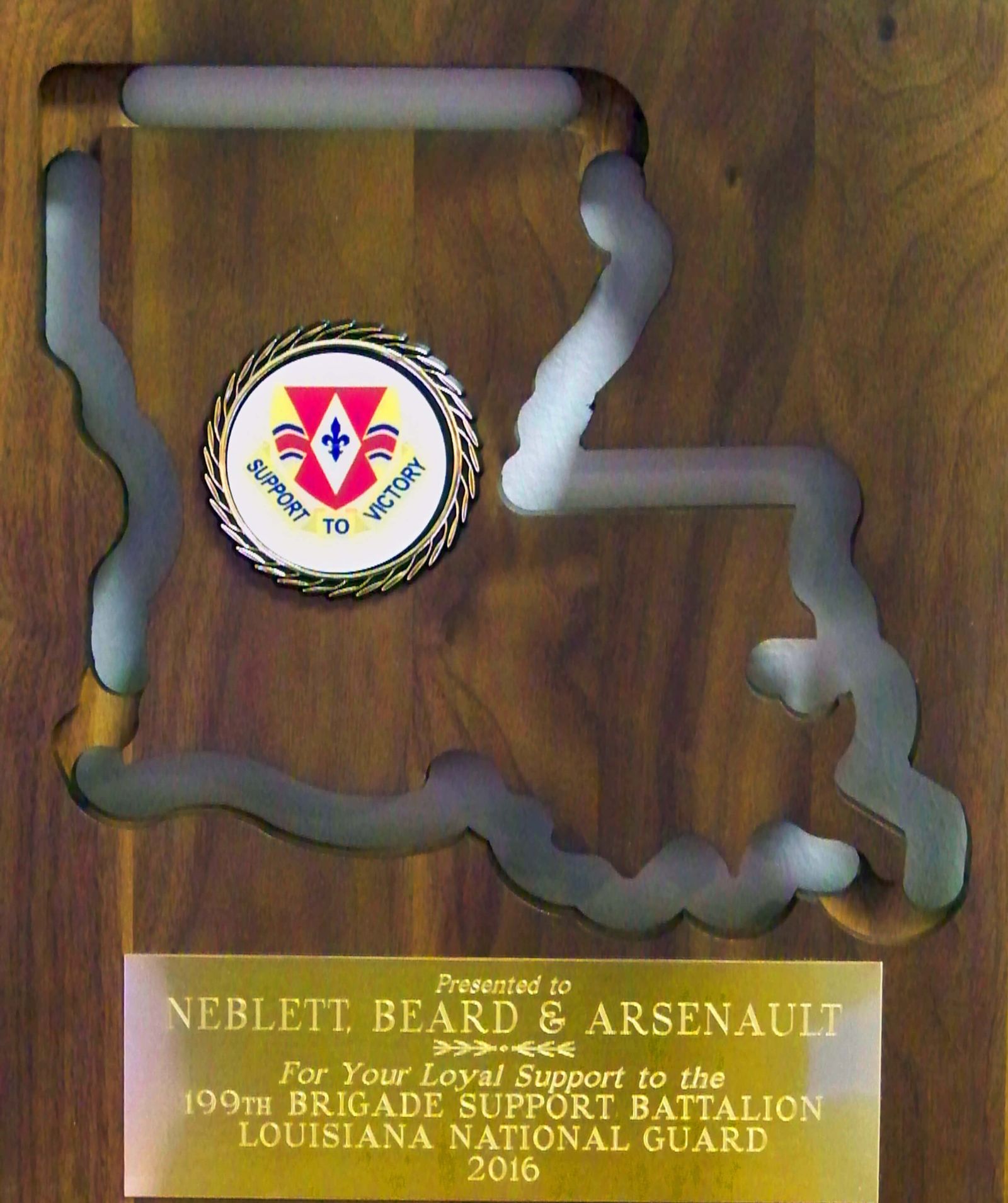 On December 10, members of Battalion for the Louisiana National Guard had a chance to reflect on their accomplishments and relax with their families at the annual Military Victory Ball and Awards Banquet. The event was held at the Holiday Inn Alexandria Downtown Conference Center.

In recognition of its financial support of this special event, Neblett, Beard & Arsenault recently received a handmade plaque delivered by Commander Marc E. . “This past year was than normal for our unit with two different emergency flood operations in CENLA and Baton Rouge,” Prymek told the attorneys at the firm. “Our soldiers are truly heroes, placing themselves in harm's way to save lives, protect property, and restore order. However, they typically downplay that title as they do what they are trained to do. Our awards ball allows us to decompress, relax with our families, and reflect on accomplishments, and it is your support that makes that event possible. Thank you so much for your continued partnership.”

The 199th Support Battalion consists of four companies and three detachments, from Jonesboro in the northern part of the state to St. Martinville in the south and from Alexandria in the central part of the state to Fort Polk in the west. Each group was called to play a key role in response to the March and August flooding.

During the Baton Rouge flooding in August, nearly 2,500 personnel were mobilized to play a key role in evacuations, search and rescue missions, engineering missions, commodities distribution, and security at several shelters. In just over one week's time, they rescued more than 19,000 citizens and 2,500 pets.

According to The Washington Post, the August floods were a result of a "no-name storm" that dumped three times as much rain as Hurricane Katrina. Before the flooding was complete, residents saw 7.1 trillion gallons of water or enough to fill Lake Pontchartrain about four times. In comparison, Hurricane Katrina dumped about 2.3 trillion gallons of rainwater in the state. Without the rapid response of the members of for the Louisiana National Guard, the toll of this storm could have been much worse.

At Neblett, Beard & Arsenault, we're proud to do our part to support the men and women working to make our community a better place. We extend our deepest appreciation to the members of the 199th Brigade Support Battalion for their sacrifice in the name of our state and country.