Asbestos has been determined by the Department of Health and Human Services, the World Health Organization and the  Environmental Protection Agency to be a human carcinogen. Many people who have been exposed to and breathed in asbestos while working have decades later been diagnosed with various diseases associated with asbestos. 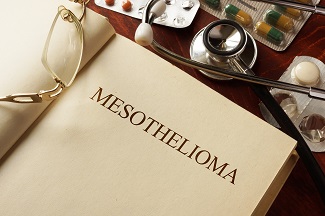 associated with all asbestos diseases. People who are affected may have been exposed in the 1940s, 1950s, 1960s or 1970s. Unfortunately, there is still asbestos in some older buildings, and people are still being exposed and becoming ill.

Mesothelioma is a rare form of cancer that affects cells that are found in the lining of the chest (pleura), the heart (pericardium) or the abdomen (peritoneum), according to the National Cancer Institute.

The only reliable test for diagnosis of mesothelioma is a tissue biopsy. Fluid biopsides have given a higher percentage of negative results than the tissue biopsy test.

Lung cancer caused by asbestos exposure is thought to occur at a younger age than other lung cancers. These types of cancers tend to occur in the lower lobes of the lungs as well. If the exposed person is a smoker, the risk of getting asbestos-related lung cancer rises exponentially.

Prognosis depends on several factors, including but not limited to, the size of the tumor or the extent of cancer in the body. Treatment of the disease depends on these factors, and consists of surgery, radiation, and chemotherapy, and can comprise a combination of all three.

If you or a loved one have been diagnosed with mesothelioma you need to speak with an experienced attorney as soon as possible. Contact us online or call us directly at 318.541.8188 to schedule your free, no obligation consultation.